RICHMOND – Today, candidate for governor Senator Jennifer McClellan (D-Richmond) announced her plan to make Virginia number one in the nation for voting rights at the historic downtown mall in Charlottesville. McClellan’s agenda would build on her work passing the Voting Rights Act of Virginia – the first voting rights act in the South.

McClellan’s plan — entitled “Making Virginia Number One in the Nation for Voting Rights” — would also ensure that 100% of polling locations are accessible for Virginians with disabilities, protect the gains made on Virginia’s voter laws by funding the newly established Voter Education and Outreach Fund, and engage Virginia’s youngest voters through a civic engagement workgroup.

“It’s time to make Virginia the number one state in the country for voting rights,” McClellan said. “My great-grandfather faced literacy tests, and my father was subjected to poll taxes. We remember what generations before us faced, and we must protect voting rights for generations to come. As governor, I will build on the Voting Rights Act of Virginia with an expansive voting rights plan, so that no community across our Commonwealth will have to endure obstacles to the ballot box. While other states pass damaging legislation, Virginia must remain a national leader on protecting the right to vote.”

During her announcement, McClellan discussed her family’s history with voter suppression and intimidation. Her great grandfather was subjected to literacy tests and made to find three white men to “vouch for his character” before he was allowed to register to vote, her grandmother was not allowed to register, and her father paid poll taxes to cast his ballot.

“Jenn’s plan to safeguard voting rights in Virginia will make our Commonwealth a beacon for democracy across the country,” said Tram Nguyen, executive director of New Virginia Majority. “As our next governor, Jennifer McClellan will defeat the vestiges of Jim Crow and voter disenfranchisement that are still baked into Virginia today. Jenn has been a leader on this issue her entire life, from reversing restrictive GOP voter ID requirements to passing one of the strongest Voting Rights Acts in the country. Her plan will champion democracy through every corner of the Commonwealth.”

Under her plan to “Make Virginia Number One in the Nation for Voting Rights,” McClellan will will: 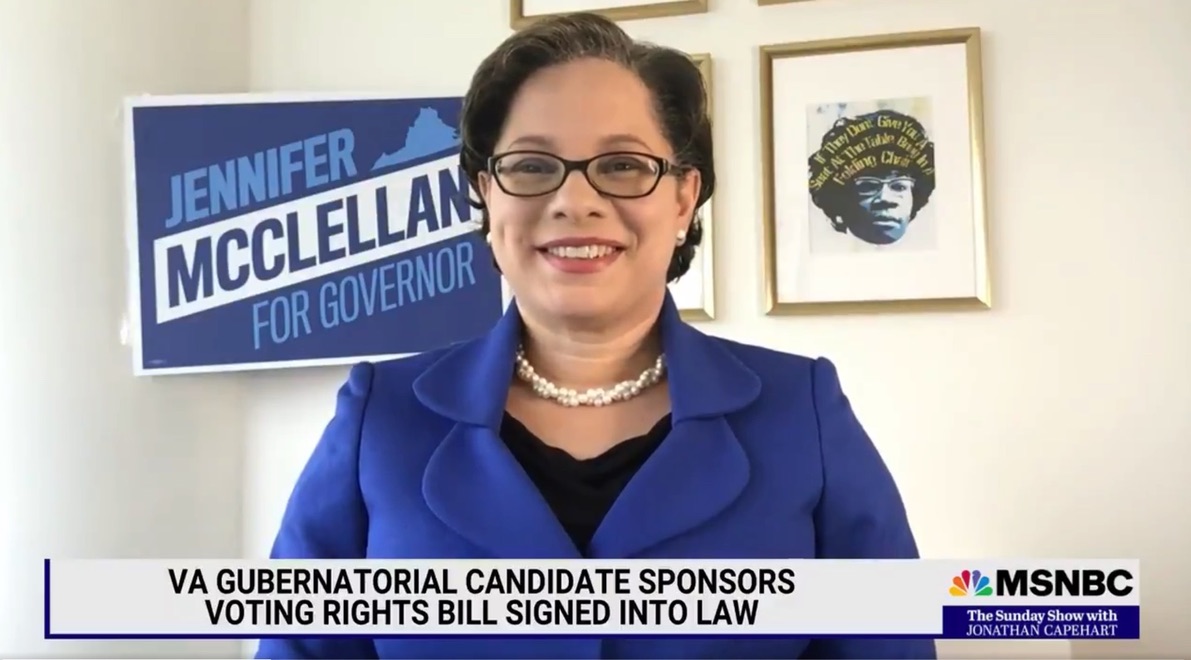 In McClellan’s 16 sessions in the legislature, she has driven and fought for generational progress in voter protections and rights. She helped reverse the GOP leader’s 2010 restrictive voter ID requirements and the set of seven restrictive Republican voter ID laws from 2013, expanded the list of accepted voter ID options, helped create no excuse absentee voting, extended the timeline for mailed absentee ballots, enabled permanent absentee voting by mail, created automatic voter registration and same day registration, and ended prison gerrymandering in the redistricting process. McClellan’s leadership passing the Voting Rights Act of Virginia in the Virginia Senate laid the foundations for generational progress in protecting Virginians’ right to vote.