We have now finished the first full week of the Session, and things are moving fast. As noted in my last newsletter, House and Senate Republicans have filed many bills to roll back progress we made over the past two years on voting rights, workers rights, reproductive health, addressing climate change and gun violence, and criminal justice reform. Last week, Senate Democrats stood as a brick wall to some of those bills.

The Privileges & Elections Committee defeated bills to reverse progress we made removing barriers to voting. These bills would have repealed same-day registration legislation set to take effect October 1, 2022 and reinstated the voter ID requirement repealed in 2020.

Last week also saw pushback against Governor Youngkin’s unconstitutional Executive Order scrapping the statewide school mask mandate seeking to allow parents to opt-out of local mandates. I joined Senator Ghazala Hashmi and Delegates Jeff Bourne and Schuyler VanValkenburg in a press conference expressing our concerns about the Order, which violates a law we passed last year that requires schools to adhere to the U.S. Centers for Disease Control’s (“CDC’s”) COVID-19 guidelines “to the maximum extent practicable.”

As the parent of two children in Richmond Public Schools, I understand and share the anxiety many parents feel for their children’s safety that has been heightened with the COVID pandemic. My Democratic colleagues and I support our school divisions doing what they need to do to keep our children and adults in those school buildings safe, and following guidelines from the CDC. We will not let the Governor overstep his authority and bully our school systems into doing anything less.

You can listen to an audio recording of my full remarks here.

Parents have made clear their own displeasure with the Governor’s order, such as a group of Chesapeake parents that sued the Youngkin Administration, asking the Supreme Court of Virginia to rule the order violates state law.

Last week, I filed two additional bills as part of my legislative agenda.

SB 654 facilitates mitigation of wetland and stream impacts of certain projects. Under current law, a water protection permit applicant can be required to purchase wetland or stream mitigation bank credits to address any adverse impacts to wetlands and streams from the permitted project, but that mitigation could be far from the proposed project. This bill allows the permit applicant to purchase those credits from the locality in which the site is located if no credits are available to purchase in a mitigation provider’s primary service area or no credits are available at a price below 200 percent of the current price of credits.

SB 658 addresses situations in which physical evidence of a crime has been collected, but not transferred to the Office of the Chief Medical Examiner (OME) for analysis. Current law requires physical evidence recovery kits (PERK) that are transferred to the OME to be stored for at least 10 years (or 10 years after a victim who was a minor at the time of collection turns 18).  However, PERK that are not transferred to the OME are often destroyed. The bill requires that if a PERK is not transferred to the OME under certain circumstances, it must be retained by the law enforcement agency for the same amount of time as those that are submitted. The bill also requires law-enforcement agencies to inform the victim, parent, guardian, or next of kin of the unique identification number assigned to the PERK and information regarding the PERK Tracking System, unless disclosing this information would interfere with the investigation or prosecution of the offense, in which case the victim, parent, guardian, or next of kin shall be informed of the estimated date on which the information may be disclosed, if known. Del. Eileen Filler-Corn (D-Fairfax) is carrying House companion legislation.

Five of my bills advanced out of committee last week to be voted on by the full Senate.

The General Laws Committee reported on a party-line vote SB 494 to strengthen protections for employees who are victims of discrimination by establishing a consistent definition of employer under the Virginia Human Rights Act as one employing 5 or more employees. Under current law, the 5 employee threshold only applies to employers who unlawfully fire an employee or fail to make reasonable accommodations for pregnant workers, but not to other employment discrimination claims. The bill also establishes a 2-year statute of limitations for filing a written complaint or civil lawsuit and makes clear that a prevailing plaintiff shall be awarded attorneys fees.

The Finance and Appropriations Committee reported SB 472 by a 14-2 vote to fund school construction or renovation by allowing any locality in Virginia to impose up to a 1% increase in their sales tax, subject to voter approval. Under current law, such sales tax is only permitted in nine localities: Charlotte, Gloucester, Halifax, Henry, Mecklenburg, Northampton, Patrick, Pittsylvania, and Danville (there are also bills pending to add Charlottesville and Isle of Wight). This is one of seven recommendations from the bipartisan School Construction & Modernization Commission, which I chair. You can read news coverage of this bill here.

The Transportation Committee unanimously reported SB 478, which allows the government entity that operates Richmond International Airport (RIC) to have a foundation focused on fostering public appreciation of the importance of aviation, assisting the public in aviation travel, and developing the next generation of aviation professionals in the Commonwealth. 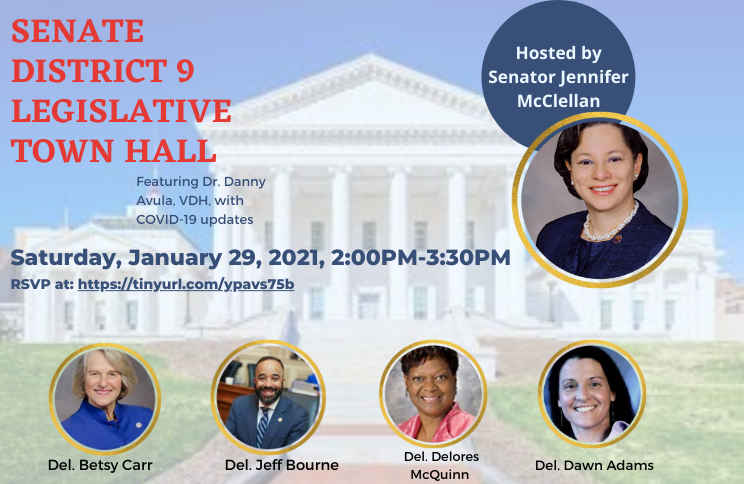 I am to be joined by Delegates Delores McQuinn, Betsy Carr, Jeff Bourne, and Dawn Adams, each of whom serves portions of Senate District 9.
We will also hear a COVID-19 update from Dr. Danny Avula, Director of the Richmond City and Henrico County Health Departments and former Virginia state vaccine liaison for the Virginia Department of Health.

If you haven’t already, please take my legislative survey and provide your feedback on the issues before the legislature. Your feedback helps me serve you better!